Stephen Amell of the TV Series Arrow on CWTV.
Profile on Ones2Watch4

This October Stephen Amell will make his starring role debut in CW’s action adventure television series, Arrow, based on the Green Arrow character of DC Comics. As billionaire Oliver Queen, he plays a vigilante hero set to make amends for his family and clean up Starling City – much in the way of Batman and Gotham City, only with a mysterious family history. His homecoming finds him a changed man after being stranded on an island.

Born in 1981 and raised in Toronto, Canada, Stephen’s early career started as an extra in Queer as Folk as a spinning instructor. Then he began guest starring on Canadian television shows such asHeartland, Dante’s Cove and Degrassi: The Next Generation. He won a Gemini award, the Canadian version of an Emmy, for his guest starring role on ReGenesis. Stephen was also nominated in 2007 as part of the Best Ensemble Cast for Rent-A-Goalie. In the direct-to-video film Screamers: The Hunting, the sequel to 1995’s Sci-Fi flick Screamers (Peter Weller), Stephen played mysterious Guy, the leader of the surviving humans on a distant mining planet ravaged by war. It is in this film where he shows a hint of his much darker side, especially in the surprising finale.

Stephen found that things moved at a slow and unsure pace in the Great White North. Los Angeles beckoned and suddenly the work was pouring in. First there was CSI: Miami, then NCIS: Los Angeles,90210 and, in 2011, he became werewolf Brady on the popular CW show, The Vampire Diaries. He finished off his incredibly busy year with the made-for-TV movie Justice for Natalee Holloway as the creepy but charismatic Joren Van Der Sloot.

Amell’s breakthrough role has got to be busboy-turned-prostitute Jason, on HBO’s Hung. The much younger Jason starts infringing on Thomas Jane’s escort service racket. If you needed further enticement to watch, his work on Hung represents Stephen’s first nude-scene work. In an even steamier role (as if that were even possible), he played Amy Brenneman’s lust interest, Scott Becker, paramedic hottie, in several episodes ofPrivate Practice. Additionally Stephen recently appeared on New Girl. We should point at this point that Stephen was a serious contender for the lead in Spartacus: Blood and Sand, which ultimately went to Liam McIntyre. So you see how hard work and making one smart decision can open tremendous doors.

Arrow promises to be a darker series and Bourn-esque in nature than CW’s lighter fare of Smallville. The pilot was directed by David Nutter, who directed pilots for shows such as Supernatural, Dark Angel, andSmallville. The production is also working with DC comics to remain  true to the characters, satisfying fans of the graphic novel series.

An avid Social Networker, according to Stephen’s Facebook page he prepped for Arrow by watching movies such as The Bourne Trilogy, Lethal Weapon 1 and 2, Die Hard, and Season 4 of Mad Men (“just BECAUSE”). Of course, he did also physically train for the role, both on and off the set and maintains a dairy-free and gluten-free diet. His fabulous physique is proof of his dedication. Stephen, with his solid good looks from head to toe (hard not to stop at the abs), seems personable and yet untouched by the star syndrome. That may change, however, once Arrow hits the air, for then his full star quality will be realized. 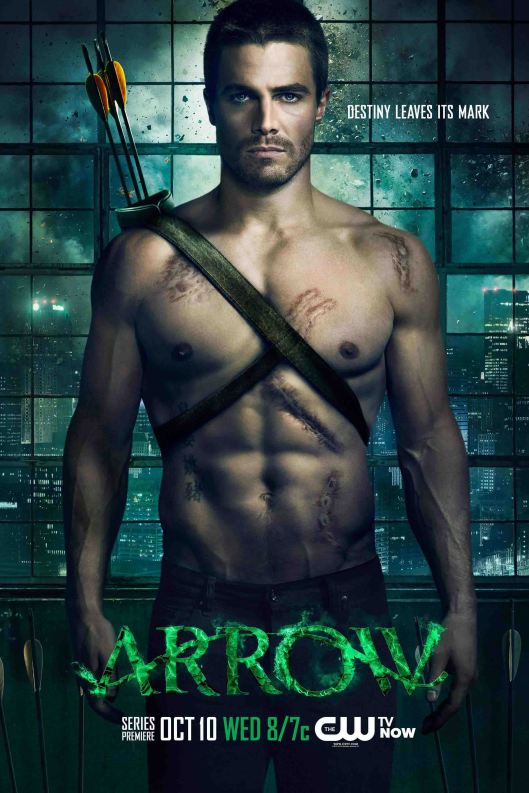